A 13-year-old boy was diagnosed with a right ventricular (RV) tumor when he was 5 years old and has no cardiac-related complains and symptoms till the present moment. He was growing according to his age, is studying at the school, and doing sport (biathlon). The hemodynamics was unchanged and stable.

The dynamics EchoCG investigation are presented in Table 1. In 6 months, the lipoma was not found and firstly appeared in the middle part of interventricular septum (IVS) in 5 years age about 8*6 mm in size. It was growing slowly and in 13 years in the recent EchoCG the lipoma size reached 10*14 mm and was located not only in the middle, but also in upper part of interventricular septum (IVS).

In August 2020, the MRI on GE 450w cardiac MRI in Fat Suppression Mode revealed lipoma also in the upper and middle thirds of IVS, in the RV. The structure irregular elongated shape, 49*28 mm in size and 8,77 ml in volume and consisted of adipose tissue (Fig. 1-3). In the middle of the short axis of the heart, the structure is located at the level of 9 and partially of 8 segments, in the basal parts of the short axis - at the border of 3 and 4 segments, in posterior IVS region 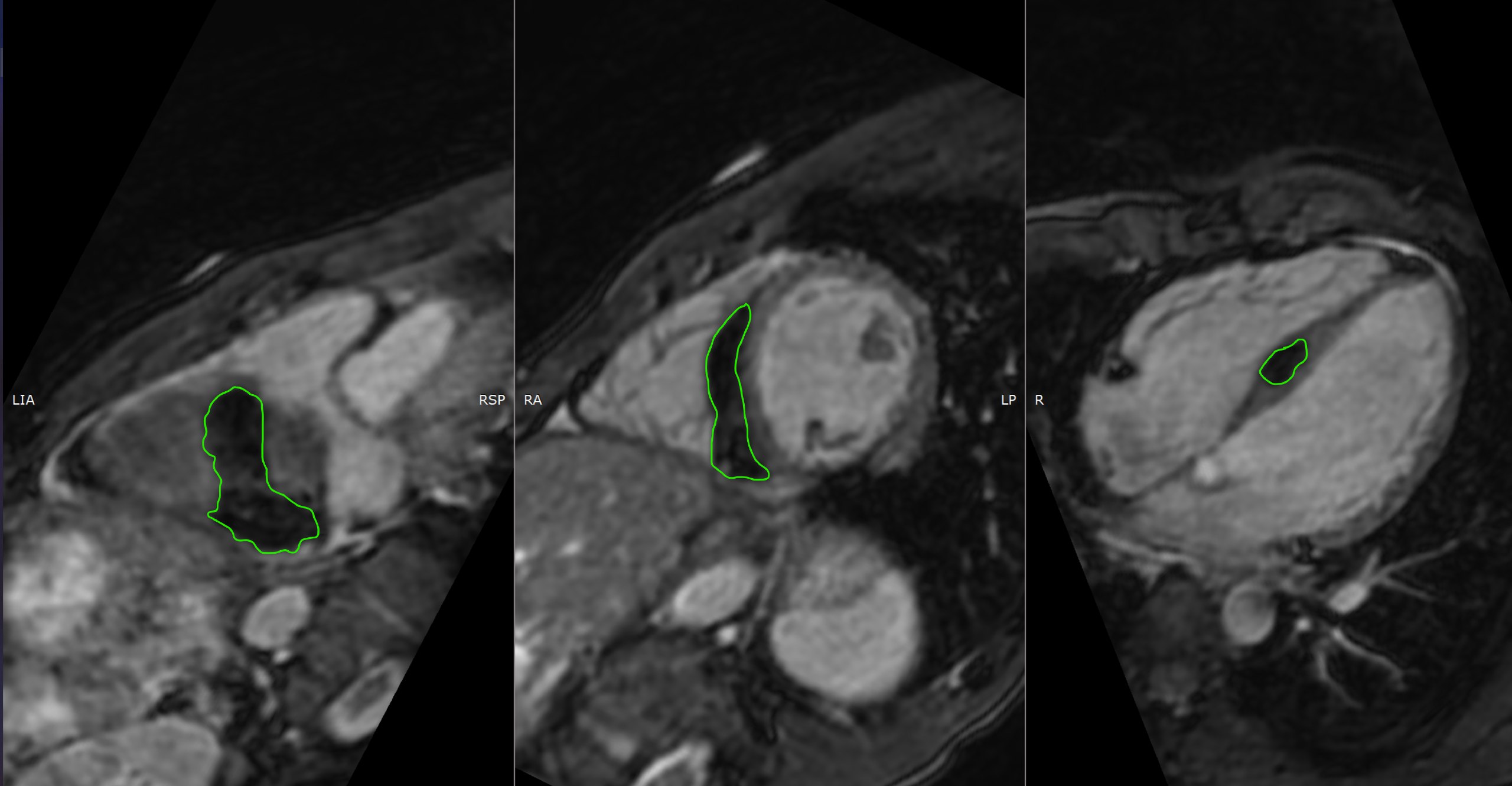 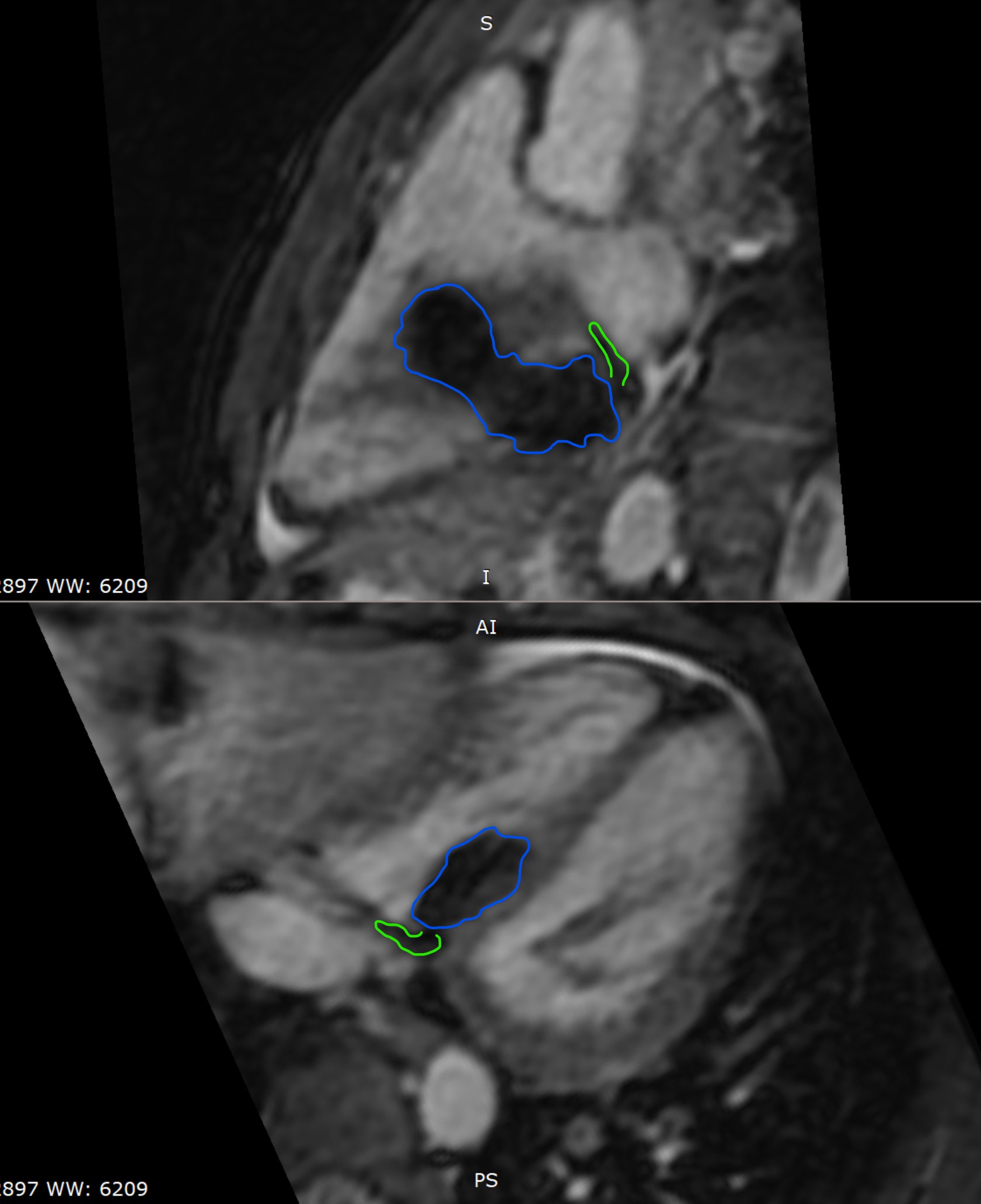 1. What is the morphology of the tumor?
While lipomas appear to not enhance and have homogenous high signal intensity on T1 and T2 weighted images, liposarcomas typically contain solid, enhancing components intermixed with areas of fat signal. Another differential diagnosis for a fat-containing mass within the heart is lipomatous hypertrophy of the interatrial septum. Lipomatous hypertrophy is a misnomer as the pathophysiology involves hyperplasia of adipocytes as opposed to hypertrophy. Unlike lipomas, these are unencapsulated, spare the fossa ovalis and thus bear a dumbbell shape.
2. Is it necessary to perform a diagnostical biopsy?
Considering the high specificity of the MRI fat suppression regimen and the location of the lipoma in the IVS, which is accompanied by the risk of intraoperative and postoperative complications for the patient, the diagnostic biopsy for now is not indicated.
3. When should a surgical resection be performed?
In the patients till the present time no pericarditis, tumor invasion, damage to adjacent structures, rapid growth, impaired cardiac hemodynamics (obstruction) and arrhythmias, this structure can be regarded as benign, are present and that is why it does not require resection. Surgical treatment will be indicated if clinical symptoms of heart failure or clinically symptomatic arrhythmia appear. It is important to note that in the case of obstruction, given the location of the lipoma in the IVS, the scope of the operation will not be radical. 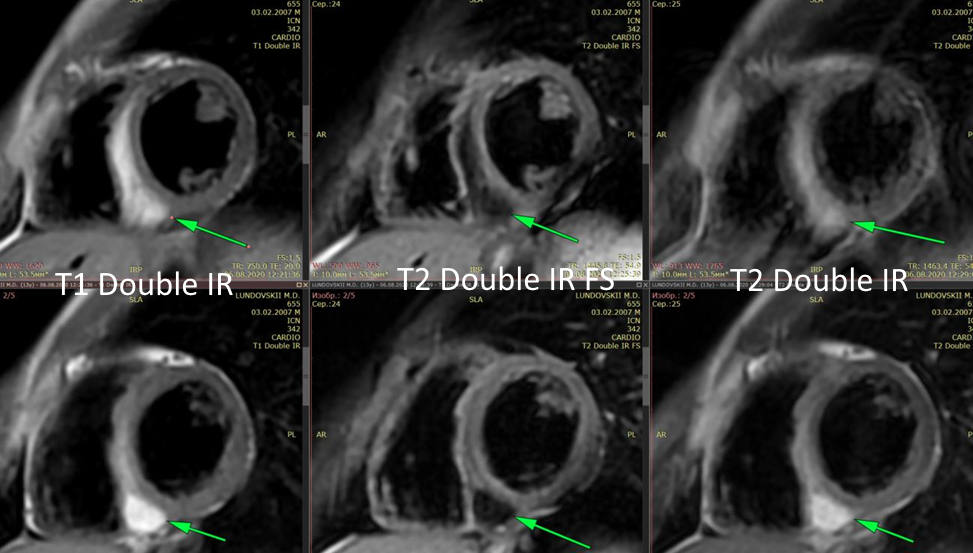 Based on the results of the examination, we decided that there was no need for a diagnostic biopsy and consequently, surgical resection of the tumor. At the same time, recommendations were given to monitor the patient's complaints, ECG, and to conduct an MRI examination once a year to prevent dysfunction of the heart and estimate the right time for possible surgical resection in the future.